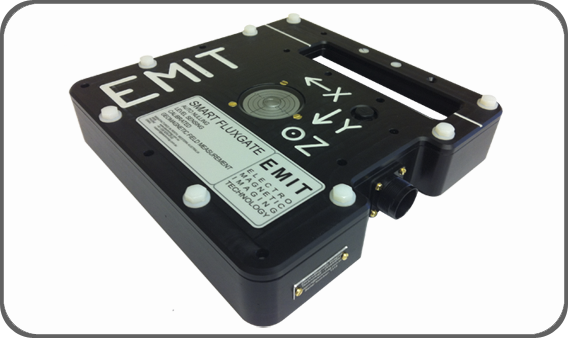 The response of a good conductor in a conductive host is observed earlier in time in a B-field TEM survey than in a dB/dt survey, which means that it is more likely to be above the noise floor of the TEM system. It is simple to interpret B-field data in Maxwell or other interpretation packages. A low-noise fluxgate magnetometer is the perfect sensor for MMR surveys. MMR surveys are typically carried out at frequencies in the vicinity of 1 Hz and below - an area where the fluxgate magnetometer performs very well.

EMIT has been deploying fluxgate magnetometers for EM geophysical surveys since 1995 when the first modern fluxgates were used for TEM surveying in Australia. This revision of EMIT's fluxgate system is designed to make the use of a 3-component fluxgate magnetometer simpler and more precise. The SMART Fluxgate is specifically designed to interface with EMIT's SMARTem24 Receiver system, but can be deployed with most receiver systems.

The SMART Fluxgate is powered by the SMARTem24 Receiver. The SMARTem24 Receiver also handles the recording of the on-board accelerometers, calibration and tilt corrections, measurement of the Earth's field and the automated nulling of the Earth's DC magnetic field so the EM signal can be amplified. EMIT uses the lowest noise fluxgate sensors available for commercial use and accurately calibrates the orientation and sensitivity of the SMART Fluxgate.